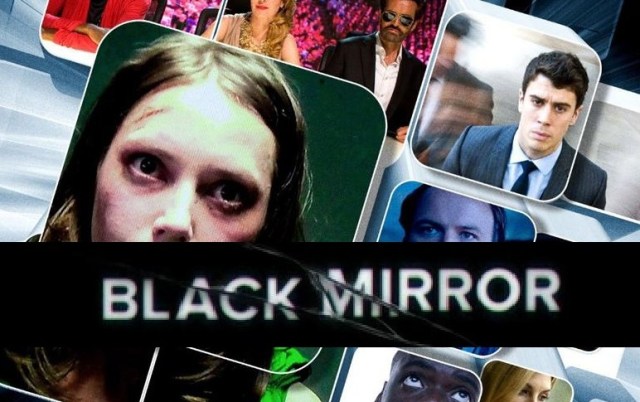 Consisting of various plots in the course of three episodes, Black Mirror manages to poke fun at our modern age of advanced technologies, all while unveiling their darkest potentiality that many may never had thought possible.

Black Mirror is a British sci-fi satire TV series that skillfully uses subtle humor to reveal the dark side of technology. None of the episodes ever denote the idea that any of these technologies they satirize are negative in their entirety, but do indeed make a serious point of their possible negative implications. If anything, each episode should come to our advantage in understanding what could go wrong and then proceed, through both dialogue and action, in mitigating each risk as best as possible.

Starting off with episode one, “The National Anthem,” we find ourselves in a modern day U.K. with Prime Minister Michael Callow (starring Rory Kinnear) having been awoken to be alerted of the Duchess of Beaumont Princess Susannah’s (starring Lydia Wilson) kidnapping. When delivered a recording showing the Princess being temporarily safe, the unknown kidnapper makes one singular request to ensure she remains alive – the Prime Minister must have sex with a pig…on live television!

Unfortunately for the Prime Minister, the kidnapper had also sent copies of this recording to the press. While the government does temporarily withhold the media from airing the recording, foreign press was much less reluctant in airing it, resulting in mass sharing and downloading via Youtube. In mere minutes the entire world became aware of the situation, leaving the Prime Minister with only a few options to fall on.

While everyone watches, however, first in humorous delight but later in disgust, the Princess is already on her way back to safety. Soon after the Prime Minister finishes, having sacrificed his dignity for the safety of the Princess, it’s revealed that the Princess had already been released before the live spectacle was aired. Subsequently the finger that was delivered, presuming to be the Princess’s, was actually the kidnapper’s – now known to be a visual artist named Carlton Bloom, having set up the entire plot as an artistic message of mankind’s growing desire to ignore reality in place for what’s playing on TV.

Episode two, “Fifteen Million Merits,” moves away from modern technology and instead emphasizes on the future use of virtual reality. The date of this episode’s setting is unclear, but the technology used isn’t really that futuristic. In fact, we find Bingham “Bing” Madsen (starring Daniel Kaluuya) confined within a building made up almost entirely of virtual and augmented reality entertainment – from TV shows, to video games, to pornos. Though he isn’t alone, rather is one of thousands of people, exercising to keep energy flowing throughout the establishment, all while gradually building enough merit through their “hard work” to someday be judged at a talent show and, hopefully, win their “freedom.”

With the recent death of his brother, resulting in 14 million merits being transferred to his own collection (you need 15 million to win a golden ticket to the talent show), he’s found very little in life worth finding value in. Instead he wastes merits on the most menial of things. Though, in other times, he’s forced to waste merits to either mute or block ads and shows he refuses to watch and is forced to – given the technology they use tracks when someone is actually watching the screen or covering their eyes.

Soon thereafter, however, Bing hears Abi (starring Jessica Brown Findlay) singing in a bathroom. Having been inspired by her beautiful voice, he decides to transfer all 15 million merits he acquires to her as a gift, hoping that her voice leads her to freedom by winning the talent show. Although wowing the panel of judges with her miraculous voice, they unfortunately reveal that they’re in a surplus of singers and have no use for another, but instead believe her to have talent in the porno industry. With no other option than to either keep exercising or accept the offer of acquiring her “freedom” via sexual exploitation, she reluctantly chooses the latter.

Enraged by the entire spectacle, all while being forced to watch Abi having sex on the screens as time goes by, Bing decides that enough is enough – that the entire world (for what’s left of it) should be given the truth. To achieve such, he breaks a shard of glass from one of the monitors, works his ass off to earn himself back those 15 million merits, and confronts the judges at the talent show. With the shard of glass pointed at his neck, Bing unleashes a poetic attack on the sham that is known as “reality.” The only problem is that the judges found it to be quite entertaining, as did the thousands of people watching afar via their avatars, winning him the opportunity to continue scripted versions of this kind of poetic discourse, twice a week, for everyone to watch and enjoy. Knowing he has no other real option, Bing accepts, and so the status quo remains.

And then the final episode of season one, “The Entire History of You,” takes place in the near-future when each moment of our lives is recorded via an implant connected to our optic nerves. Everything we see is recorded and archived, ready to be played again for whatever reason – whether it be to remember a pastime or to use in defense of yourself during arguments regarding the past.

A young lawyer named Liam Foxwell (starring Toby Kebbell) finds himself at a gathering of friends and acquaintances, including his own wife Ffion (starring Jodie Whittaker). As they’re having dinner, one of the guests named Jonas (starring Tom Cullen) decides to go on a rant about his personal disbelief in serious monogamous relationships, noting that whenever his wife is upstairs, waiting to have sex with him, he’s instead finding more joy in masturbating to archived memories of his steamier days with other women. Noticing that his wife tends to pay much more attention to Jonas than to himself, Liam finds himself very uncomfortable.

When both Liam and Ffion go back home, an argument commences on what exactly was going on between her and Jonas. He even uses recorded memory of the night to point out clear instances when she wouldn’t even look at him without showing discomfort, all while glowing at the very presence of Jonas. Eventually Ffion reveals that her and Jonas were once a thing a long time ago, but only lasted a month.

Now inebriated, the next morning Liam drives off to Jonas’ home and confronts him, demanding that he deletes his entire archive of memories, which he believes contain memories of him and his wife when they were together. Only moments later, we find a now-sober Liam awakening in his crashed vehicle, trying to recollect what happened. Using his implant, he goes through the entire gap of lapsed memory, only to realize something he hadn’t noticed until at that very moment.

Having returned home, Liam makes his way upstairs and wakes up his wife. Using his implant, he shows her the entire ordeal, only to then pause mere moments before Jonas is forced to delete the entire archive of his memories. Zooming in, he points out a file’s thumbnail listed having been recorded only 18 months ago, revealing not only his wife’s face but the very same painting that is hooked on the wall above their bed. Not only does this entail evidence that she cheated on him with Jonas, making her story of their supposed one-month-only relationship a complete lie, but subsequently possible evidence that his own baby daughter may not actually be his after all.

As time goes by, Liam now finds himself alone in his own house, left only with memories of what once was. Increasingly distraught by each memory he replays, he decides to end all of it and cut out the implant himself. Now, Liam is just alone.

Season one of Black Mirror is quite the surreal watch, one which I believe every serious Transhumanist – or, at the very least, tech savvy person – should consider watching at least once. As noted before, knowing the possible risks of technology would come to our advantage by creating dialogue, and consequently action, to help mitigate the risk from ever materializing – as a result, making these technologies all the more efficient and safe.

“Technology creates most of our new problems, but in return it delivers more options and possibilities (for good and harm). But simply having new choices between good and harm is itself another option we didn’t have before.” – Kevin Kelly

Episode one, however, is something which is already occurring unfortunately. Given the recent spectacle in the United States when a group of hackers, known only by their alias ‘Guardians of Peace’, leaked all the emails by Sony execs and threatened to attack any and all theaters if any of them air the anti-North Korea comedy film The Interview, one can’t help but notice the striking similarity with that of “The National Anthem.” It reveals a risk – a dark side of technology – that is currently afoot, revealing a negative implication to both open-access sharing via online social media services and the power hackers today have over once-powerful corporations.

For episode two, I find it to be the most farfetched of them all, but still a possible risk nonetheless. As we continue to increase our usage of both virtual reality and augmented reality technology, will we ever really have control over whether or not we wish to have our lives in constant attention of these technologies? One of the facets of Transhumanists today is the desire to blur their reality with both their offline and online lives, resulting in a newly defined sense of reality that combines both worlds together. Of course, most Transhumanists don’t wish to force these technologies on anyone, and support the right of individuals to opt out of merging their online lives with their offline one.

And as for episode three, I must admit the plot appears to be quite plausible. In fact, I myself have thought of using technology such as the memory implant to help me win arguments against family and friends. In fact, I’d wager a guess that most of everyone else has a similar desire as well. While certainly a risk, what “The Entire History of You” does is reveal both the possible abuse and subsequent risk of using memory implants to reveal things best left hidden. Most Transhumanists I know, including myself, would most assuredly opt for a memory implant. So this episode of Black Mirror would come as a great service for us in recognizing the risk of acquiring such power and hopefully convince us to not abuse it in the ways it were abused by the show’s characters.

In conclusion, I highly recommend everyone reading this to go and watch Black Mirror as soon as possible. It contains great acting, great storylines, and a wicked sense of humor at times, given its satirical nature. To top it all off, both seasons one and two are available right now on Netflix.

Next week I’ll be doing a review for season two. Until then, though, be sure to catch a glimpse of it yourself. I promise that you won’t regret it!

One thought on “Black Mirror Season One: The Dark Side of Technology”