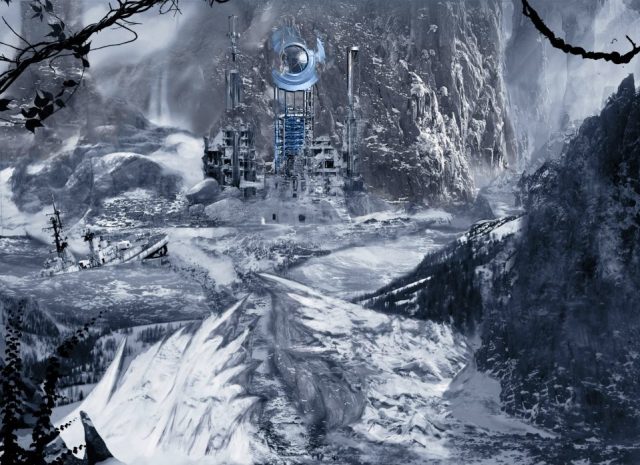 Commissioned by the executive director of the Foundation, this long now digital painting is inspired by the LongNow.

Here is a bit about the LongNow:

The Long Now Foundation was established in 01996* to develop the Clock and Library projects, as well as to become the seed of a very long-term cultural institution. The Long Now Foundation hopes to provide a counterpoint to today’s accelerating culture and help make long-term thinking more common. We hope to creatively foster responsibility in the framework of the next 10,000 years.
The Clock and Library Projects

Below is an essay by a founding board member Stewart Brand on the need for, and the mechanism by which, The Long Now Foundation is attempting to encourage long-term thinking.

Civilization is revving itself into a pathologically short attention span. The trend might be coming from the acceleration of technology, the short-horizon perspective of market-driven economics, the next-election perspective of democracies, or the distractions of personal multitasking. All are on the increase. Some sort of balancing corrective to the short-sightedness is needed-some mechanism or myth which encourages the long view and the taking of long-term responsibility, where ‘long-term’ is measured at least in centuries. Long Now proposes both a mechanism and a myth. It began with an observation and idea by computer scientist Daniel Hillis :

“When I was a child, people used to talk about what would happen by the year 02000. For the next thirty years they kept talking about what would happen by the year 02000, and now no one mentions a future date at all. The future has been shrinking by one year per year for my entire life. I think it is time for us to start a long-term project that gets people thinking past the mental barrier of an ever-shortening future. I would like to propose a large (think Stonehenge) mechanical clock, powered by seasonal temperature changes. It ticks once a year, bongs once a century, and the cuckoo comes out every millennium.”

Such a clock, if sufficiently impressive and well-engineered, would embody deep time for people. It should be charismatic to visit, interesting to think about, and famous enough to become iconic in the public discourse. Ideally, it would do for thinking about time what the photographs of Earth from space have done for thinking about the environment. Such icons re-frame the way people think.

Hillis, who developed the “massive parallel” architecture of the current generation of supercomputers, devised the mechanical design of the Clock and is now building the monument scale version of the Clock in the Sierra Diablo range of West Texas near the town of Van Horn. The first Clock prototype is currently on display at the London Science Museum and others are at the headquarters of Long Now in San Francisco. The Clock’s works consist of a specially designed gear system that has precision equal to one day in 20,000 years, and it self-corrects by “phase-locking” to the noon Sun.

Long Now added a “Library” dimension with the realization of the need for content to go along with the long-term context provided by the Clock – a library of the deep future, for the deep future. In a sense every library is part of the 10,000-year Library, so Long Now is developing tools (such as the Rosetta Disk , The Long Viewer and the Long Server ) that may provide inspiration and utility to the whole community of librarians and archivists. The Long Bets project – whose purpose is improving the quality of long-term thinking by making predictions accountable – is also Library-related.

The point is to explore whatever may be helpful for thinking, understanding, and acting responsibly over long periods of time.

Artist and Interaction designering with a Bchelor of Fine Arts from Seattle Art Institute (in process) and Associate of Arts from AIU doing industrial design for firm such as Posh and Giordanous Group and working for the Foundation doing transhumanist related commissioned digital art.
See all posts by Marquiz Woods