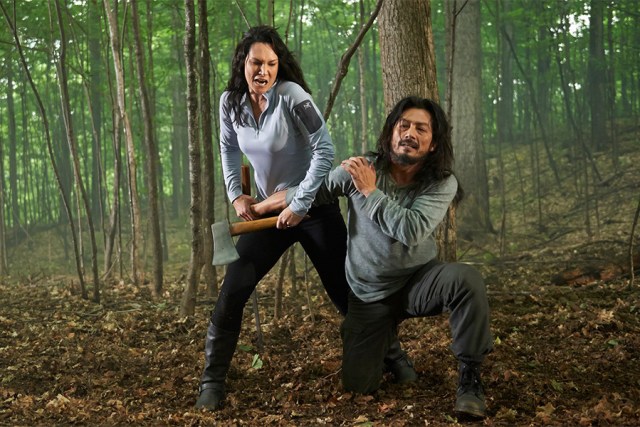 Another episode of Helix has passed and it would seem we’re no closer in understanding the full picture of this dark, sci-fi tale. If anything, we’re now starting to realize that “you are what you eat” is turning into a deadly reality for each character.

In the previous episode of Helix season 2, in my review I note the increasing influence the Neo-Luddite cult, in which the CDC has been given shelter by, has on the new strain of the NARVIK virus. In this latest episode, however, we’re finally starting to understand how said cult are capable in releasing this virus without much notice from either the leader of the cult or the CDC. The contamination of foods points to a dark future we may subsequently have to face ourselves.

For episode 4 of Helix we find the CDC now making contact with the former CDC-member Alan Farragut, who has been hiding on the island, pretending to be one of the members of the cult. Before we had no clue as to what his motives were, but the team are finally in on his plans – to not only destroy any remnants of the new NARVIK virus strain created by Ilaria Corp., but also destroy any remnants of Ilaria’s Immortals. The only problem, however, as Alan comes to realize, is that his own brother who is leading the CDC is apparently in collusion with Ilaria and is reporting back to them of Alan’s plans.

30 years into the future, Julia awakes to find out that her own father had drugged her with whatever she consumed. Not only that, Hatake has clearly gone off the rails and truly believes his dead wife and son are living with him in his cabin. To make the situation all the more horrific, apparently Hatake had used a preservation method for the bodies of his deceased wife and son to preserve them and keep their bodies sitting by the table. The reason Hatake had drugged Julia, however, was to ensure that she’s strapped in place and be prepared for a similar fate – to be preserved (killed) and sitting with her deceased family.

30 years back, the CDC discovers that those infected had apparently ingested something sweet, which is carrying the new NARVIK virus strain. The only problem is that the leader of the cult forbids anything to be consumed that aren’t vegetables or fruits. During their investigation they discover an army of bees surrounding the walls around the general area, which is oozing out honey. When they test the honey, evidence of the virus appears. Apparently members of the Neo-Luddite cult are genetically modifying honey, via selective breeding, to carry the new NARVIK virus, effectively turning people into the very creatures that threaten everyone’s existence.

It would appear that this latest episode of Helix is really starting to play into the growing fears of genetically modified foods here in reality. The only problem I have with this is the fact that, after 3o years of research into transgenic crop production (“GMOs”), scientific consensus has come to the conclusion that GMOs are safe to both human consumption and the environment. The Transhumanist movement has been attempting to battle against the ignorance of the anti-GMO crowd, but there is certainly the fear that, one day, a new crop might arise that’s been modified to harm people. Consequently, all our efforts in fighting against the illegitimate fear of GMOs will be in vain.

“All the food we eat – every grain of rice and kernel of corn – has been genetically modified. None of it was here before mankind learned to cultivate crops. The question isn’t whether our food has been modified, but how.” – Michael Specter

As the advent of the open-source movement continues moving forward, and as greater access to resources such as genetic modification tools increases, what people create using said resources is up for debate. We could create heaven on Earth, as is the wish for all Transhumanists. But we could also create hell on Earth just as easily. Our greatest weapon in combating this possible existential risk is education. Without proper education, helping people understand the implications of their actions, we could very well destroy everything we ever hoped to create.

Until then, however, I highly recommend you watching the latest episode of Helix if you haven’t already. As noted before, season 1 of Helix is available on Netflix, and the newest episode of season 2 will be premiering tonight, 10pm (EST), on the SyFy channel. I can’t wait to see what comes next!

One thought on “Helix Season 2 Episode 4: You Are What You Eat”