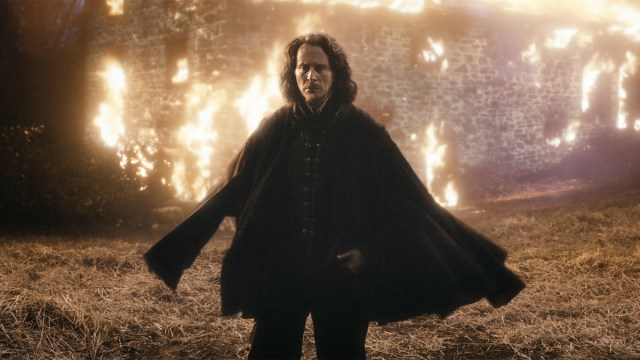 In the last two episodes of Helix we begin realizing just how thin of a line there is in seemingly well-established loyalty, whether it’s the Neo-Luddite cult or the genetically modified Immortals.

In episode 5 I noted in my review of the revelation that the leader of the Neo-Luddite cult was actually an Immortal, hiding from Ilaria and creating a family of his own on the island. Couple this with Ilaria’s pursuit in finding a cure to the virus strain that’s capable in killing them, and you have a tale of twists and turns that almost always seems to revolve back on the Immortal’s presence on Earth.

In these latest episodes of Helix we start to understand Ilaria’s role – or, officially, lack thereof – with that of the new NARVIK virus on the island. Created by members of the Neo-Luddite cult via grafting, the CDC are in a race against time to try and stop the virus from spreading any further. The only problem is that there appears to be growing discontent amongst the Neo-Luddite cult who are growing weary of their leader’s inability to protect them.

At one of the Ilaria headquarters it’s also revealed that a faction within the company, led by Julia, are attempting to maneuver them in a way that is positive to humanity. The main group of Ilaria see the growing population as a threat to civilization and wish to eradicate that threat through violent means. The faction led by Julia, however, believes there could be a more passive solution to this problem and is given hint of a non-Ilaria Immortal living on an island, who has the ability of genetically modifying infertile people.

Back on that very same island, discontent continues to brew amongst a faction of the Neo-Luddite cult, gathering in numbers and threatening to “protect” the sick from the “evil” CDC. In doing so, however, they unleashed the infected, thus killing the majority of the cult.  Those that are left, however, are beginning to grow ill of their leader and are demanding solutions to this problem. Realizing the situation at hand, the leader of the Neo-Luddite cult must make a choice: let his years of work burn to the ground or start over from scratch?

These last two episodes of Helix has really struck a chord with me, given its attempts in correlating the struggle for indefinite life extension with that of the insane desire to control the global population. In fact, in reality the only people who are claiming Transhumanists are involved in population control plots are that of the conspiracy theorists. In reality, our means of addressing any future prospect of overpopulation are varied – from creating underwater living spaces, given that 3/4 of the planet is made up of ocean water, to extending our footprint throughout the cosmos and creating human colonies on other planets. What we’re not wanting to do, however, is kill people – especially not through bio-terrorist attacks!

“Since, in the long run, every planetary civilization will be endangered by impacts from space, every surviving civilization is obliged to become spacefaring–not because of exploratory or romantic zeal, but for the most practical reason imaginable: staying alive… If our long-term survival is at stake, we have a basic responsibility to our species to venture to other worlds.” – Carl Sagan

It’s in my hopes that TV shows like Helix doesn’t create an anti-Transhumanist rift in the mindset of people, but instead teaches us what not to do in regards to addressing future issues like overpopulation. There are so many ways in which we can go about addressing and, eventually, alleviating any risks that may arise as we continue progressing forward. Resorting to violence is not, nor will it ever be, the answer.

Until then, however, I highly recommend people watch Helix if they haven’t already. Season 1 is currently on Netflix and the next episode of season 2 will be airing later today, 10PM (EST), on the SyFy channel.