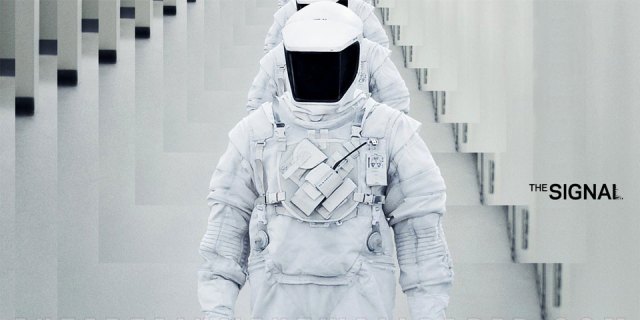 In a plot that amalgamates Wally Pfister’s Transcendence with Chris Carter’s The X-Files, science-fiction thriller The Signal imparts a hypothetical scenario where post-biological beings are keeping watch over the Transhuman journey of our species.

The Signal takes place in a modern day Earth, following three young MIT students on a road trip to California. On their way, while resting at a hotel, both Nic Eastman and Jonah Breck (starring Brenton Thwaites and Beau Knapp) receive a message on their laptop from a hacker going by the alias known as NOMAD. Taunting them with verbal attacks and threats, Nic and Jonah respond forthright, only to then receive a live-stream recording of their room, indicating that NOMAD knows exactly where they are and has access to their equipment.

Refusing to ignore NOMAD’s taunts, Nic and Jonah use their coding skills to pin point an exact location of the hacker’s server and decide to make a detour in their trip to confront him or her. The signal leads them to an abandoned house in the middle of Nevada, with no sight of the hacker being anywhere near the location. As they make their way back to the car, they hear their friend, Haley Peterson (starring Olivia Cooke), screaming for help. Once they reach the car, they notice Haley in the distance, screaming and running towards them, only to then be sucked up into the air, with Nic and Jonah subsequently passing out soon thereafter.

Waking up in a sterile underground facility, with the numbers 2.3.5.41 tattooed on his arm, Nic finds himself sitting in front of a Dr. Wallace Damon (starring Laurence Fisburne), not able to feel his legs, let alone the pain from his muscular dystrophy. Demanding for answers, Dr. Wallace informs Nic that he and his friends had encountered what is known as an EBE (an extra-terrestrial biological entity), and that his friend Haley is currently in a coma.

Over time, Nic eventually discovers that he can communicate with Jonah via a small vent in the wall. Like Nic, Jonah tells him that his body feels weird and that the scientists in white HAZMAT suits did something to him. Soon after Nic hears strange noises coming from Jonah’s location, as the facility’s alarms go off. Not knowing what’s going on, Nic attempts to use the chaos as a distraction for his escape, but unfortunately fails to get away.

Demanding to see Haley, Nic is brought into a room with her as she remains in a coma. Although restrained, Nic tries moving closer to Haley, consequently falling over onto the floor, revealing why he couldn’t feel his legs all this time – they were replaced with advanced prosthetics using alien technology! Agitated over the growing mistrust between himself and the scientists, Nic uses his super powered legs to make one last attempt to escape the underground facility with Haley. Succeeding, both Nic and Haley discover they’re in the middle of a barren desert.

Their next mission is leaving for good, hoping to find civilization once more. On their way, they run into Jonah disguised in one of the white HAZMAT suits, using it to veil his arms which have been replaced with alien prosthetics like Nic’s legs. Haley’s augmentation appears to be an unknown cybernetic implant in her spine. Now believing that they’re actually located in Area 51 (after all, the sum total of the tattooed numbers, 2.3.5.41, is 51), the trio push forward in their escape as they’re pursued by armed men from the facility.

Jonah is eventually killed as he helps Nic and Haley get away, only for the two to once again confront Dr. Wallace, standing in front of the bridge that leads them away from the desert. At his command, Dr. Wallace has the armed men subdue Haley and evacuate her out of the area with a helicopter. With only Nic and Dr. Wallace left, Dr. Wallace reveals to him that his last name, Damon, spelled backwards reads NOMAD, and that it was Nic’s fault, not his own, that he and his friends find themselves here.

Angry at the prospect of being defeated, Nic uses his legs to run at supersonic speeds, running past the bridge and towards the direction the helicopter had taken Haley. The only problem is that, instead of leaving the desert, Nic smashes through an invisible barrier, discovering that, instead of being in Area 51, he and his friends were actually on an alien space habitat, numbered 2.3.5.41, about to dock on its home world. Looking back at Dr. Wallace, he takes off his helmet and reveals he’s actually a robotic alien.

The Signal is a rollercoaster ride of ideas, both real and farfetched, that translates similar ambitions for several people within the Tranhumanist movement. For one, Nic and his friends’ cybernetic augmentations represent a real-world – rather than alien – technology that an increasing number of people are starting to acquire. While certainly not within the realm of achieving supersonic speeds just yet, modern prosthetics and implants are delivering abilities for people that no other human in the world acquire biologically. Some call it the bio-hacker movement, while others see it as a stepping stone to eventually achieving post-humanity. Either way, advanced prosthetic technology continues to grow in both efficiency and popularity. It’s only a matter of time until it reaches the efficiency displayed in the film.

As for the prospect of there being cybernetic aliens looking over us, kidnapping potentials to harness their technology, that particular idea would appear to be far less likely. Though in the future, one could assume that our Transhuman transition will eventually transform us into a spacefaring species before reaching post-humanity, traversing the cosmos far beyond any human could travel. So then, what if we become the cybernetic aliens, looking over another planet of potentials?

While we’re quite certain nothing of the sort is happening here on Earth, there’s still the possibility of it occurring elsewhere, several lightyears away from our galaxy. In fact, written for a forthcoming publication by NASA, astronomer Susan Schneider has released a paper, titled “Alien Minds,” where she argues that the likely dominant intelligence throughout the cosmos won’t actually be biological, but rather artificial! She joins a whole body of fellow astronomers who have since taken up this viewpoint as well.

“I think it very likely – in fact, inevitable – that biological intelligence is only a transitory phenomenon… If we ever encounter extraterrestrial intelligence, I believe it is very likely to be postbiological in nature.” – NASA Astrobiologist Paul Davies, The Eerie Silence: Renewing Our Search for Alien Intelligence

Surprisingly, despite its professional cast and amazing use of CGI, The Signal was a low-budget, independent film. The plot was very well done, with a nice twist in the end, and the acting was on par with that of mainstream Hollywood hits. Most importantly, however, the film was thought provoking and very enjoyable to watch as I contemplated its real-world similarities in our own transition from human to post-human.

If you weren’t able to watch the film in any selected theaters, or catch it online by whatever means, The Signal will be officially released to purchase on January 30th of next year. I highly recommend watching this film, for it could represent what our species will become!