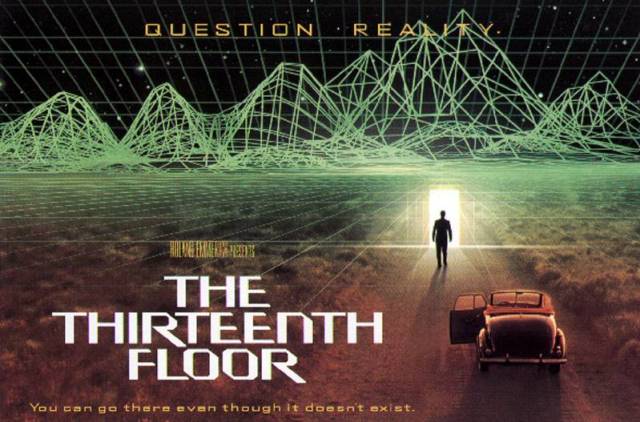 In a thrilling plot of existential angst, the thought-provoking 1999 film The Thirteenth Floor delves deep into the dark side of artificial intelligence and virtual reality.

Physicist Silas Beane once argued that, statistically speaking, given the prospect of advanced civilizations creating simulated universes, we’re more likely to be living inside a simulation than in physical reality. The Thirteenth Floor explores this very concept, as it starts with software engineer Hannon Fuller (starring Armin Mueller-Stahl) leaving a simulated 1937 Los Angeles, only to then find his life in danger in the modern day 1990s. Racing against time, Fuller makes a quick phone call to his colleague and protégé Douglas Hall (starring Craig Bierko) to warn him of a recent discovery he made that places his life at risk. Not but a few moments later Fuller is murdered by an unknown assailant.

The next day, given word of Fuller’s death, Hall finds himself stuck between the queries of both Detective Larry McBain (starring Dennis Haysbert) and Jane Fuller (starring Gretchen Mol), who ostensibly is the daughter of the now deceased Hannon Fuller. Left with no real answers to respond with, and a memory of last night left in gaps, Hall makes his way up to the thirteenth floor of the building and has his associate Jason Whitney (starring Vincent D’Onofrio) help him enter the virtual simulation of 1937, believing that Fuller might’ve left him a message inside.

Jacking in as bank clerk John Ferguson, Hall finds himself ruminating the complexity of the virtual world he’s entered, from its physical realism to the peoples’ sentient awareness of life and free-thought. Left with only two hours to figure out what message Fuller left him, given the risk of a downloaded mind’s overexposure in virtual space, Hall flees the bank in search of Hall’s 1937 virtual incarnation.

Though when he locates him, he’s left disappointed, for he appears to be nothing more than a virtual shell of what was once Fuller, left with no knowledge of any message whatsoever. Making his way to a bar, Hall discovers the virtual incarnation of Whitney, who is a bartender that goes by the name Jerry Ashton. Asking if he knew whether Fuller ever visited the area, he’s left surprised with his answer: not only was Fuller a regular, but his reasons for being here were to have sex with women.

Soon thereafter, Hall starts feeling sick and makes his way to the restroom to collect himself. As soon as he reaches one of the stalls, he’s ripped from the virtual world and back to reality, leaving his virtual incarnation in a moment of confusion as he goes back to the bartender, asking him if he knew where he was.

Feeling displeased with his lack of answers, the next day Hall decides to jack himself in without an engaged timer to rip him back out of virtual space. Making his way back to the bar, Hall brings the virtual Fuller along with, hoping that he could, somehow, remember his lost memories of being here and whether he left a message with anyone. As Fuller concentrates, his memories start flooding back in, like trying piece together a scattered puzzle. One memory, however, is made clear: he did, indeed, leave a message, and it was left with bartender Ashton.

As both Ashton and Hall locks eyes, Ashton attempts to run away, though eventually stands his ground against Hall, revealing to him that he read the message, saying the world’s a sham. Ashton then goes on about the directions given, to drive off where no signs lead you the way and to ignore roadblocks, revealing to him a virtual gridlock space where his world ends. Left in a state of existential angst, Ashton goes crazy in his pursuit to find out the truth and attempts to kill Hall. Though just mere moments before death, Whitney pulls Hall out of virtual space and back to reality.

To make the entire situation all the more confusing, Hall is then confronted by Detective McBain and informs him that Jane Fuller isn’t who she says she is, with no record of Hannon Fuller ever having a daughter. Hall then contacts the taxi driver to find out where he dropped Jane off, and makes his way there, only to witness what he originally believed could only occur in virtual space: a woman going by the name of Natasha Molinaro, though is clearly Jane Fuller’s physical shell. Left with the uneasy prospect that’s flooding his mind, Hall then contemplates Fuller’s message inside the virtual world – “the world’s a sham” – and follows the same directions as Ashton did. Like Ashton, Hall discovers that, just as 1937 L.A., 1990’s L.A. is subsequently a virtual simulation.

Without revealing too much further into the film, for anyone reading through who hasn’t watched the film just yet, I can say that it’s a film that every Transhumanist should watch at least once. Like in my review of the miniseries Ascension, The Thirteenth Floor takes up a setting that is gaining traction here in our own world – the prospect of us living in a simulation. Me, personally, I don’t believe we are, but there are many Transhumanists who believe in the Simulation Hypothesis. The question these Transhumanists should ask themselves then, given the plot of the film, is should we even know whether we live in a simulation or not? What if we do discover that we live in one and our simulators try containing the threat by turning off the simulation? I’m not one to let an existential risk to sway me from ignoring knowledge, but it’s certainly a risk one should discuss and, if possible, help mitigate.

The other element of the film in which makes up the Transhuman world would be virtual reality – a growing market today that is more popular than ever. For now, our virtual reality is nothing in comparison to the film’s advanced version, which contains artificially intelligent characters at a human-level of intelligence. But soon we will reach that point and we’ll be left with very uneasy questions having to be answered. Such as: ‘Are these people real?’ ‘Does our containing them in a simulated universe at our behest surmount to a form of slavery?’ ‘And if we turn off the simulation, are we partaking in what can only be described as mass genocide?’ Whatever the answers may be, true virtual reality is coming and it’s coming fast.

“By the early 2020s we will be routinely working and playing with each other in full immersion visual-auditory virtual environments. By the 2030s, we will add the tactile sense to full immersion virtual reality.” – Ray Kurzweil

For a film less than two hours long, The Thirteenth Floor was still relatively good. The characters could use better symmetry, but then I tend to ignore those kind of problems when it comes to older films. In this case, the film was released in 1999, with a great cast and an awesome storyline.

When it comes to how we should approach the future as we grow closer to developing true virtual reality, or even come close to answering the question of whether we live in a simulated universe or not, I believe films like The Thirteenth Floor acts as an excellent example of what not to do. Instead of trying to kill or control your virtual simulations, once they acquire consciousness, perhaps we should leave them be and pursue their own means of freedom and self-determination.